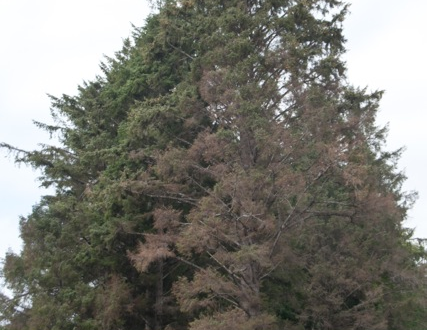 EDITOR’S NOTE: Even here on the Oregon Coast, many large evergreens are showing stress from drought, in particular Sitka Spruce, in addition to our mild winters (no hard freezes) have compounded the spruce aphid problem as well.
Here’s some good advice about taking care of our big trees.
By Kym Pokorny, OSU Extension Service
CORVALLIS, Ore. – Even though we’ve had a mild summer, conifers in Oregon are still getting hit hard by several years of drought, to the point that many are dying.
“Beginning in 2013-14, we started to see significant impact on Doug-firs in western Oregon,” said Dave Shaw, a forest health specialist with Oregon State University Extension Service. “Since evidence of drought often doesn’t show up until the following spring, we are still experiencing problems from the last several dry years.”
It’s past the point of just Doug-firs dying. Many conifers, including western red cedar, incense cedar, grand fir and even valley ponderosa pine are succumbing to drought.

The first signs of drought damage are dropping more needles than usual and/or an abnormally high number of cones (called “stress crop”). That will be followed by dead branches or tree tops, and sometimes entire trees.
People don’t think about watering big trees, Shaw noted, but that’s the best method to prevent death or possibly bring a not-too-stressed tree back to health. One option is to water at least six hours every two to four weeks August through September. Using a soaker hose wound around the tree to the drip line (how far the branches reach) is much more efficient than other methods. Though the cost of water adds up, Shaw said, it’s cheaper than removing a large tree, which can cost thousands of dollars.
Historically conifers dominated at higher elevations than the oak-dominant zone of the Willamette Valley. When Doug-firs and other conifers increased in abundance in the oak woodlands of the valley – driven by the end of controlled fires used by indigenous peoples – the trees were then on the lower end of their water needs.
“It’s an elevation-driven thing,” said Shaw, who has lost 12 Doug-firs on his five acres of land. “Precipitation drops as elevation drops. If you start out in the Coast Range where rainfall is typically over 80 or 90 inches of rain annually and go east to the middle of the valley, you’re historically getting only 40 to 45 inches of rain on average. So, during a drought, trees that would normally be on the edge of their drought tolerance aren’t anymore. Some trees, particularly Doug-firs and grand firs, are very susceptible to drought below a certain elevation.”
Compounding the problem is that drought-affected trees are more susceptible to pests and diseases, including aphid- and scale-type insects, bark beetles, root and canker diseases. But many of the conifers surveyed by Shaw and his colleagues don’t have insect or disease damage, reinforcing the diagnosis of drought damage.
Here are several photos by Don Best – north and south of Rockaway Beach that show dying spruce trees: 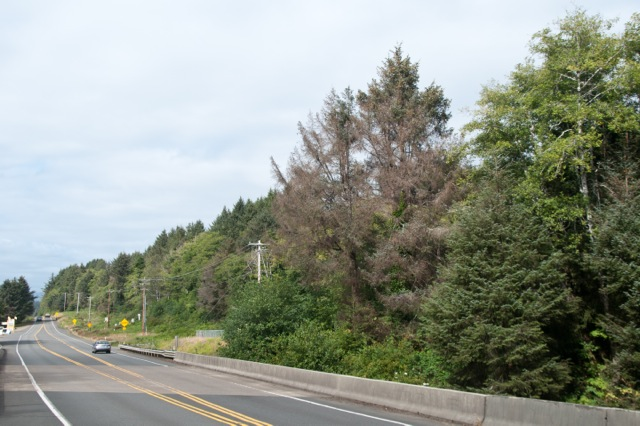 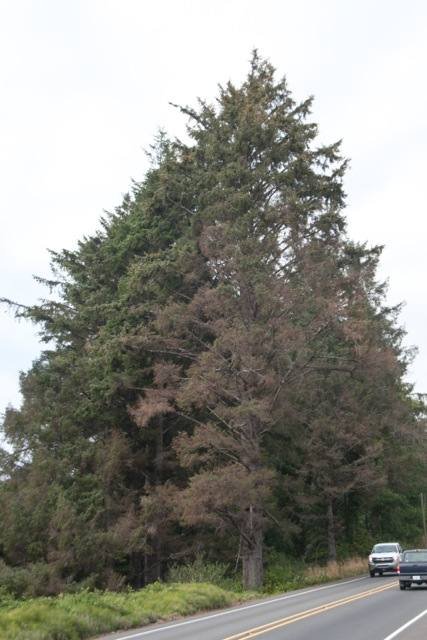 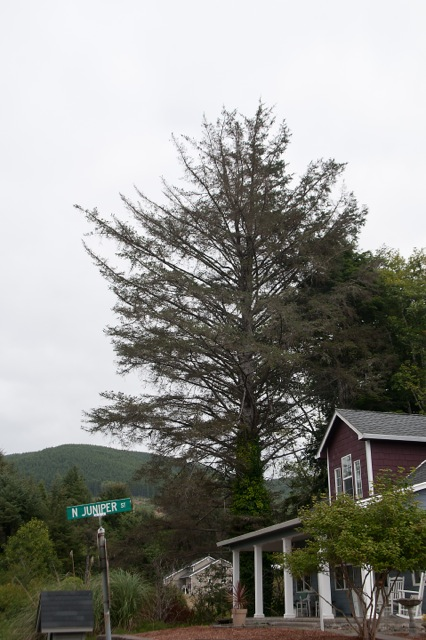 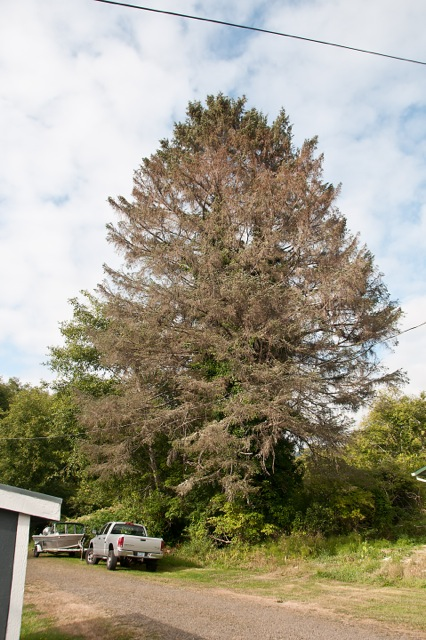 Dave Shaw’s suggestions to keep a tree healthy:
-Irrigate landscape trees during dry spells. Apply water slowly over many hours every two weeks; avoid frequent shallow watering.
-Apply mulch to the drip line to maintain soil moisture. Don’t crowd mulch around trunk; keep it a few inches away.
-Do not alter drainage near established trees (ditches, ponds, fill or removal of soil).
-Prevent soil compaction caused by vehicle or animal traffic near trees. Compaction can damage roots, especially in clay soils.
-Reduce competing vegetation.
-Plant trees that are well suited for the site. Where Douglas-fir mortality is occurring, consider planting Willamette Valley ponderosa pine or hardwoods.
-Do not fertilize during drought conditions; fertilization can increase a tree’s water requirements.
If your tree seems to be suffering, contact a certified arborist to make sure drought is the cause.