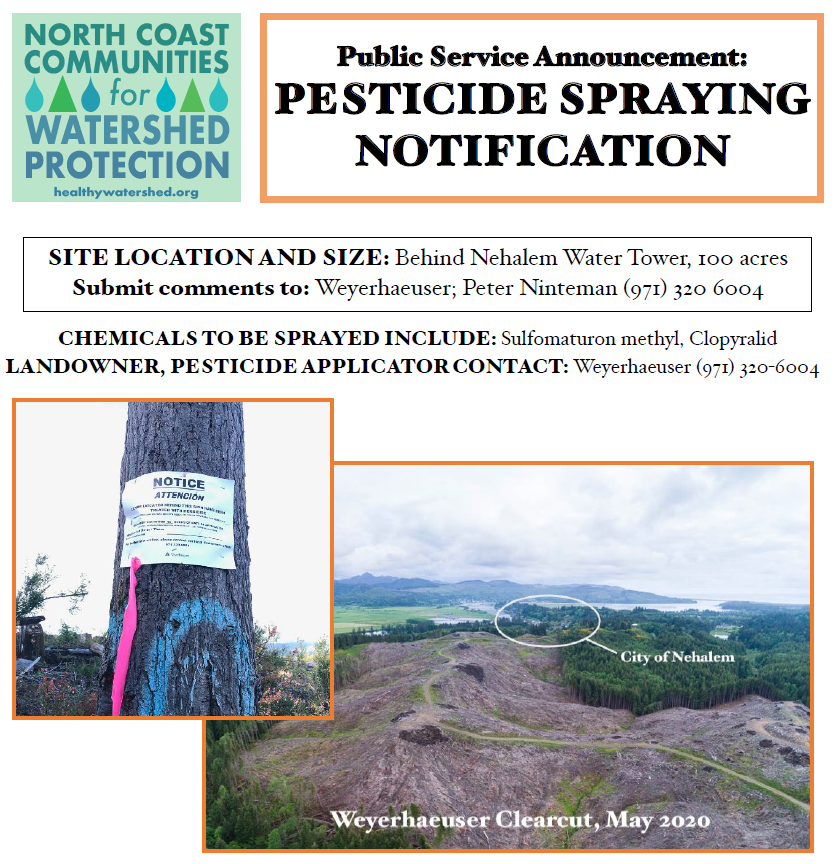 By Nancy Webster, North Coast Communities for Watershed Protection
On Wednesday, June 3, Weyerhaeuser ground-sprayed pesticides on about 100 acres of their clearcut land within 1/4 mile of residential areas of Nehalem. Several weeks ago, Weyerhaeuser had agreed to give some residents of Nehalem 24 hours notice before doing the spraying, but then they reneged on this agreement, giving Nehalem residents no time to protect their health and property. Now, we just learned that Weyerhaeuser intends to spray pesticides on another section of their land that is also very near Nehalem. Unfortunately, we do not know, even generally, when that will take place. There are good reasons to be concerned about the health effects of these applications of pesticides.

I talked with a professor who has advanced degrees in biology and environmental toxicology regarding the recent pesticide spraying of land that borders Nehalem. He and I both did literature searches on the two chemicals that we understand were sprayed: Sulfometuron methyl and Clopyralid. He suggested everyone reading this also research those two chemicals so that they can see for themselves the potential side effects of their usage.
I asked the professor whether Nehalem residents had valid reasons to be concerned about these pesticides, even though they were not applied via aerial spraying, but, rather, through backpack, ground spraying. He said that, although aerial spraying would have been worse than ground spraying, there are definite reasons for the community to be concerned. Here are some of his comments: 1.This spray operation was very close to homes and gardens……only about 1/4 mile away……and it was on a ridge above the town. Spray droplets are volatile and can drift down from the clearcut, close to people, and into water sources. Also, pesticide spray can drift away from the application site when it is breezy. (At noon in Nehalem on the day of the spraying (June 3), the recorded wind speed was 14.293 MPH). 2.The chemicals in these pesticides tend to be very persistent in the soil. Since this clearcut already has very little vegetation (and after the spraying, it will have less), the chemicals adhering to the soil can then wash downhill into streams and, eventually, into the Nehalem River. 3.These chemicals can remain volatile for as long as a year, and then revolatilize into the air in temperatures above 84 degrees. Also, on windy days this contaminated soil can blow around and end up in water sources and the adjacent neighborhoods. These chemicals are toxic to beneficial soil organisms and fish. (Having grown up in a community adjacent to where clearcutting happened, I can remember that it was always dusty afterwards.)
Studies show that minute amounts of sulfometuron methyl (brand name: OUST) can disrupt plant reproduction, especially peas, potatoes, and tomatoes. Drift from roadside and noxious weed applications of Oust have resulted in widespread crop damage totaling millions of dollars. It can cause severe eye irritation and may cause some skin sensitization.

Those of us with North Coast Communities for Watershed Protection were also concerned about the fourteen workers who did the spraying. Did they have adequate eye, skin, and respiratory protection? Given that the area sprayed was quite breezy that day, this seems particularly important. Workers doing these types of contract jobs are often without health insurance. They could also have been at a high risk of contracting Covid-19 at the worksite, as well as if they were transported as a group in vans.

Most important, it is absolutely necessary for communities to have, at a minimum, a 24-hour notice before spraying begins in order that people may safeguard their families, friends, gardens, and pets. Also, to do accurate testing of water for the presence of these pesticides or to do a long-term health survey of people who live nearby, it is essential to know in advance the spraying schedules. The more we learn about how these chemicals persist in the environment, destroy entire ecosystems, and risk both public health and the health of the environment, it becomes clear that their use needs to stop now. People are becoming more and more aware that forests play a critical role in our health and the health of the planet. Current forestry practices are risking our future and the future of Earth.

TAKE ACTION! To express your concerns about the pesticide spraying adjacent to Nehalem that Weyerhaeuser has already done and, most urgently, about the planned, upcoming additional pesticide spraying by Nehalem, please call Weyerhaeuser, the Oregon Department of Forestry, and the Governor’s Office. Call Peter Ninteman at Weyerhaeuser (503-816-9803), Bryce Rodgers at the Oregon Department of Forestry (503-325-5451) bryce.rodgers@oregon.gov ,and Governor Kate Brown (503-378-4582) https://www.oregon.gov/gov/Pages/contact.aspx Write a message to Governor Brown and then share it with local news sources, other elected officials, and the appropriate governmental agencies. Take a look at the North Coast Communities for Watershed Protection website for more information about contacting public officials.

Finally, are you interested in participating in a get-out-the-vote letter writing campaign? If so, contact Bev Stein at tillamookvf@gmail.com.

Our name, North Coast Communities for Watershed Protection (formerly known as Rockaway Beach Citizens for Watershed Protection), reflects our working together on a regional basis to insure that the air we breathe and the water we drink are safe. We now represent over 670 concerned families and individuals.
https://healthywatershed.org/
https://www.facebook.com/rockawaybeachcitizens