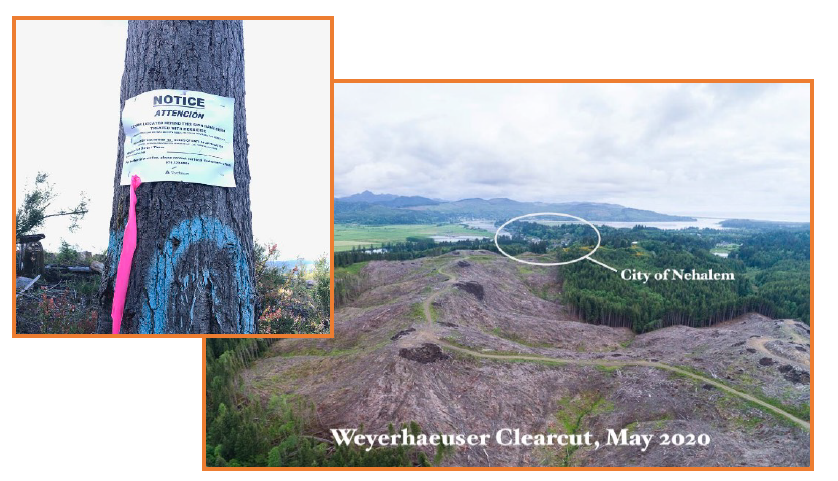 On May 31, a Nehalem resident hiking behind her house in Nehalem came upon a sign tacked to a post explaining that spraying was going to take place on ___________________ . The date was blank. She copied down the phone number on the sign and when she called it on returning home, reached Peter Ninteman with Weyerhaeuser. Peter explained that Weyerhaeuser would be spraying on the ground within the week on the property only a quarter mile from her home, from Nehalem Elementary, and numerous private food gardens. He told her that he would call to warn her 24 hours before they sprayed. Betsy McMahon also contacted Mr. Ninteman with similar questions and received the same promise.
On Thursday, June 4, she revisited the posted sign and the date June 3, 2020 had been written on it, showing that the spraying had already taken place. No one was contacted about the eminent spraying as promised.

It was not until June 5, two days after the spraying happened, that FERNS (ODF’s Forest Activity Electronic Reporting and Notification System) posted the notice on their website.
At least two medically compromised individuals that we know of either live or work in the area that was sprayed. Below I have added their comments, both originally, and a more formal comment later.
“I didn’t know the spray area was so close to the garden. I wasn’t there very long and I started feeling agitated and weird so I drove home. By the time I got there I was nearly unable to walk and my brain was shutting down. It took an hour to revive enough to walk around. I’m still not completely okay two days later,” said Maia Holliday.

“I’m glad to know there isn’t to be a second one. I had a reaction on Friday – headache, trouble focusing one eye, brain fog. I’ve been at the Neahkahnie Mountain house for five days. I didn’t make the connection until Maia Holliday called me with severe reaction after being at the 10th Street Garden…. Now I have to wonder if it’s safe for me to go home. And what about our gardens??” said Lane deMoll.

To Whom It May Concern
On Friday, June 5, 2020 when I was on an 8 am Zoom call with my sisters back East I kept noticing that the little video window of me on the far right side of the screen during the Zoom call was all blurry and distorted. This had never happened before and I am on a lot of Zoom or Skype calls these days. I couldn’t get my eye to bring it into focus. After the call I had a lot of complicated and paper work to do – with a deadline – and it was a strain to read. I realized I was having to really concentrate to focus my right eye.
About mid-morning I also developed a headache. It wasn’t a super bad headache but I rarely have headaches at all, and even more rarely ones that aren’t cured by a glass of water or some food. It wasn’t going away and I kept wondering what was causing it. I was also feeling pretty foggy and it was stressful trying to get my work done.
Then as I was getting ready to leave the house and rushing to finish all the pieces of the work I was doing, I got a call from Maia Holiday, a highly chemically sensitive person, that she was in the midst of a severe reaction from being in the 10th Street Garden. It suddenly clicked that the herbicide spraying that we knew had happened on Wednesday could be the cause of my headache and eye strain. The garden is about 2-300 yards from my house and both are about ¼ mile south and downhill from where the spraying took place on Wednesday. Way too close!
I was already on my way out to go over to the house on Neahkahnie Mountain that I recently inherited, so I grabbed some extra clothes and some other things, thinking that I probably should spend the night there instead of at my house.
I drove the windows open. My headache was gone by the time I reached the Mountain House and my eye was no longer straining.
I ended up spending several nights there – the first 2 nights because I was uncomfortable about going home.
I am almost 71 years old and have mild COPD issues with my lungs. For 20+ years I have been reacting to many chemicals, artificial scents and molds, and also have a mysterious set of food sensitivities and digestive issues. I feel very vulnerable health-wise, especially during the COVID 19 pandemic.
I am documenting this because I feel strongly that spraying should never happen in the forests and certainly should not happen so close to residential areas. There is also a grade school in the same ¼ radius of the spray area and well as the Nehalem River.
Sincerely,
Lane deMoll

When I contacted the City of Nehalem to ask about spraying and drift, the city manager told me that Weyerhaeuser has the right to do whatever they want, just like any land owner.
The reactions of Weyerhaeuser representatives as well as the City of Nehalem suggest to me that there is no concern for the welfare of local citizens. Their assertion that ground spraying is safe for humans, animals, and the environment, is turning a blind eye to scientific research that proves otherwise. The fact that they reneged on promises to the public to let people know when the spraying happened shows a blatant disregard for the people living anywhere near their clear cut tree farms, and exactly what poor neighbors they are.
This is to document the events, and I hope changes can be made to protect life.