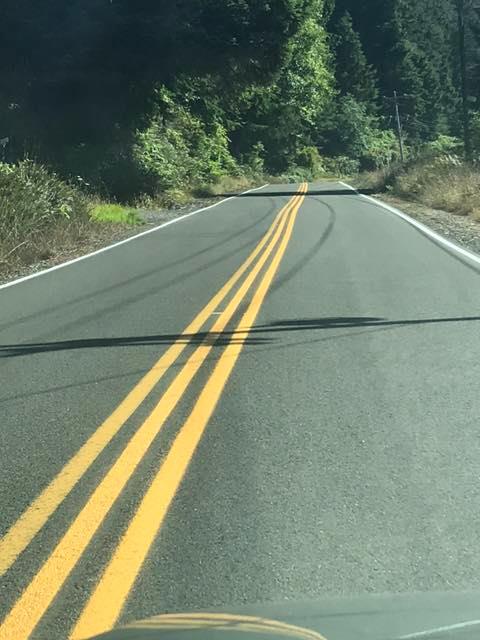 In this day and age of social media, part of my job is to monitor half-a-dozen (or more) community news groups (yes, really it’s part of my job), bulletin boards, etc. to get an idea about the “pulse” of the community – what are they talking about? Besides the usual political discussions, weather updates, and garage sales, there is occasionally a topic that demands more investigation. And since I’m out and about around the county a lot, I had noticed something odd about the new striping on the county roads — three lines? What the heck? Did someone have their measurements off? So I reached out to Chris Laity, Director of Tillamook County Public Works for an explanation, and here’s his response:

“This is a transitional period (with the center striping) that started last year. Centerline striping comes in two standard widths. The “wide” width places the two yellow lines farther apart than the narrow width. The wide pattern is used on roads that are wider, and the narrow pattern is used for narrow roads. Almost all roads in Tillamook County are narrow with no shoulders. The narrow pattern is easier to see at night and also helps to move vehicles away from the edge of the road. Three stripes instead of two “fat stripes” is related to the transition from double yellow to solid/skip striping used in passing lanes.
Many of the roads painted last year resulted in three stripes have already seen one of the stripes nearly disappear; while other areas are taking longer to fade. The speed at which fading occurs depends on a variety of factors. Marion County does our pavement striping and have noticed other areas in the state making the transition.
Until the third line fades away, we will see the third stripe. During the interim, three stripes are more visible than two…”
As several folks noted, there could be an unintentional message here to be heeded, especially with our summer time traffic – three lines means “really, really, REALLY don’t pass!”
Back to my getting around the county, every time I’m on the road I witness several incidences of unsafe driving behavior, such as passing in unsafe/no passing zones, tailgating (I’ve witness multiple times when people have literally forced off the road by an unsafe driver, extreme tailgating and then not completely pulling off the road, in an unsafe area) and the list goes on.
Another “highlight” of the season is road construction. Yes, they have to do it this time of year, and yes they do a lot of it at night, but many crews still have to work during daylight hours. Here are the various projects happening in Tillamook County – be sure to obey speed limits in construction zones and “give ’em a brake.”

– Paving operations are in South County and will be headed to Central County in about 2 weeks. Then onto North County. (generally, the reverse of last year.)
-Stop bars/RR X-ings are changing from paint to thermoplastic (this and next year.) This is where plastic is melted onto the asphalt. Costs more, lasts longer, shorter lane closures, and the crews can move onto the next site faster.

According to Chris Laity, “The biggest update is that crewmembers continue to retire and I’m unable to find replacements,” he continued, “I’ve only been able to hire one temporary flagger this year, and he joined us late. Normally we can run two crews, but we are down to one crew (yes – for the entire County…) We’ve been able to run the odd man out mowing. Crewmembers have the option of working overtime on Fridays so that we don’t fall too far behind.”

FUTURE PROJECTS:
Cape Meares Loop Road is expected to begin construction next Summer – 2020 (~8,000 trucks). This $17 million project is being designed and managed by Western Federal Lands.
Three bridges on Miami-Foley are in design; two from 2015-2016 storm damage, and one through Tillamook Estuaries Partnership.
Only three slides to be repaired (after the bridges) and that will wrap up the damages caused by that storm…