On Tuesday January 21st just before 11 am, several people reported a water spout north of Manzanita, near Neah-Kah-Nie beach, and they observed the water spout come ashore as a tornado. The National Weather Service confirmed that this was indeed another tornado to hit the area, though this one did little damage, compared to the EF-2 tornado that struck farther south in October 2016 leaving over a mile long swath of damage to businesses, homes, and hundreds of trees, forever changing the views for many in Manzanita. According to the official report issued by the National Weather Service, the EF-O tornado briefly touched down approximately 3 miles north of Manzanita.

The tornado’s path length was approximately 1/4 mile, and the path width was approximately 100 yards. There was minor damage to two homes, two trees damaged, broken windows from small projectiles, portion of fence blown down, a metal roof dislodge, and twisted and broken lawn furniture. 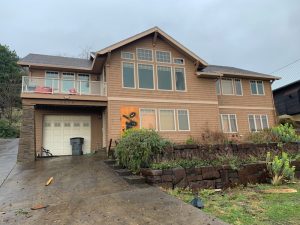 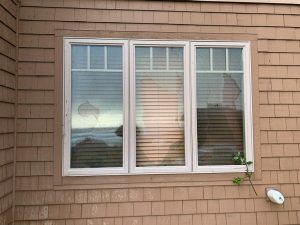 The water spout turned tornado came ashore near the base of Neah-Kah-Nie Mountain taking a path through the Kahnie Trail Loop neighborhood before dissipating as it hit the solid mountain face of the 1,680 foot coastal promontory.
Local weather spotters lit up social media sites with reports of a possible tornado, and as the Pioneer pinpointed the location, contacted friends in the neighborhood to make sure they were okay. Mike and Janice Gaines-Ehlen live on Kahnie Trail Loop and their property, “just caught the edge of the tornado,” according to Mike Ehlen. “Our heavy wooden patio chairs were tossed all over and some damage to some pots,” relayed Mike. As the tornado formed, Janice Gaines-Ehlen was heading to their yurt for yoga. “As I headed across our driveway towards the yurt, I noticed it was a little windy, but nothing out of the ordinary for a January day,” she chuckled. “I’m sure that if I had glanced over my shoulder towards the ocean that I would have seen the tornado forming. Just as I entered the yurt, it hit. I was talking with an employee at the spa (Janice is the owner of Spa Manzanita), and it stopped me in my tracks, and I said ‘Holy shit’ and I just held on,” she explained. “It lasted 45 seconds maybe, and I was like, ‘what was that?’ That was more than just our usual wind.” When the Ehlens’ had their yurt built they opted for the “extra wind protection package” that includes additional roof trusses and supports. “And it worked!” exclaimed Janice. “No Dorothy action happening here. And wow, what fun to have ridden out a tornado in a yurt.”
Marine weather alerts had been issued, but this weather anomaly formed quickly, and lasted less than a minute. “I received lots of messages about why a tornado warning wasn’t issued,” explains Tillamook County Emergency Manager Gordon McCraw, a certified meteorologist, the Pioneer regularly shares Gordon’s Weather Center reports (www.gamweather.com). He continued, “Our weather radar originates from Portland, over 90 miles away, and simple geography prevents the radar from giving us accurate views of instant weather. The earth is round, radar beams are flat.”
A construction worker in the neighborhood watched it come ashore and “explode” as it hit Neah-Kah-Nie Mountain and dissipated. Gordon McCraw in his multiple TV interviews has dubbed North Tillamook County’s Manzanita as the coast’s “tornado belt.” 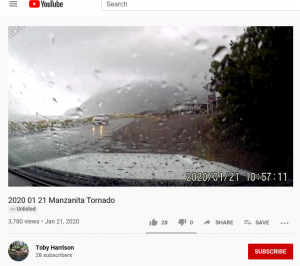 Here is a video from Toby Harrison – https://www.youtube.com/watch?v=cOrqspuMYEw&fbclid=IwAR3-8fdT0N9ZBvDrbihkC33N0j2nCddqDFnBL0fKMdsUmyVCaTGy3jA_I-g