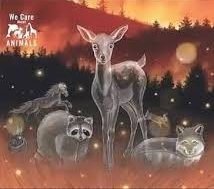 Most of the wildlife in Oregon evolved with wildfire. And even though fires are intensifying, they are nothing new to Oregon’s wild animals. There are also no documented cases of fires that have wiped out entire populations or species.

An animal’s physiology and life history strategy probably have a lot to do with how they react to oncoming flames. Birds can and will fly away and small animals may burrow underground or in rocks to escape wildfires.

Large animals like deer and elk will run away or seek refuge in rivers or lakes. Like any situation, sick, old and young wildlife are most at risk during a wildfire. Due to the fast-moving nature of some of these fires, it’s likely that we also lose some otherwise healthy wildlife like deer and bear.

The main effect of wildfires on our wildlife is immediate loss of habitat and a reorganization of animal communities.

As animals are displaced by fire, bears and raccoons, for example, will often take the opportunity to hunt and feed in newly depopulated areas, while raptors may take advantage of reduced cover to hunt small mammals and birds.

In general, most wild animals will look for suitable habitat and shelter in the immediate aftermath of a fire. Regrowth of vegetation following a fire may begin almost immediately after the flames are extinguished, depending on the heat and severity of the fire. Some species will return to burned areas while the area is still smoldering to take advantage of new growth.

For fish and other aquatic organisms, wildfire can render their habitat unlivable in much the same way it does the land. Things like water chemistry, turbidity and runoff levels may cause fish to move away and die-offs are not uncommon.

Wildfires can benefit some species that depend on or se early seral (young) forest habitat. A young forest is often very productive, and species like woodpeckers, insectivorous birds, reptiles, deer, elk and bears can thrive and increase in number following a fire.

However, species that depend on late seral (mature) forest habitat may experience reduced population levels in the years immediately following a stand replacement fire.

It’s too soon to say how these fires have impacted fish and wildlife populations, but ODFW will be assessing the impact in the coming weeks and months. While the fires are burning, our immediate concern is protecting people and property.

How you can help wildlife impacted by forest fires

After the fires are over

Once fall rain and winter snows have extinguished the wildfires, the job of assessment and restoration will begin. ODFW will work closely with federal and state partners, and others, to assess the impact of the fire on habitat and collaborate to restore  damaged or destroyed habitat.