On New Year’s Day, the Friends of Cape Falcon Marine Reserve celebrated the fourth birthday of the marine reserve, which went into effect on January 1, 2016. Located in Oregon’s ocean between Manzanita and Cannon Beach, the reserve is set aside by the State for conservation and scientific research. The Friends of Cape Falcon Marine Reserve is a local group of residents and conservation organizations dedicated to engaging the local community and visitors in ocean conservation and appreciation of the marine reserve though walks and hikes, community science projects, winter lectures, film screenings, and stewardship events.

Hikes, Walks, and Films
During 2019, the Friends held 40 events including the second annual Neahkahnie Beach Walk & BioBlitz and hikes of Cape Falcon Trail and Devil’s Cauldron/Elk Flat Trail. For these outdoor activities, the Friends partnered with experts to enrich the experience for participants: intertidal experts from Oregon Coast Aquarium and Haystack Rock Awareness Program for the BioBlitz; a whale expert from the American Cetacean Society for the Cape Falcon Trail hike; and seabird researchers and volunteer community scientists from Portland Audubon for the Devil’s Cauldron hike.


“These experts made the hikes and walks into learning opportunities, as well as a great way to get outdoors and experience the marine reserve,” said Margaret Minnick, Outreach Coordinator for the Friends of Cape Falcon Marine Reserve. “It was especially fun to spend time with the hardy group of learners who showed up for the Devil’s Cauldron hike on a foggy and rainy day in August. We were just able to see the cormorant nests on the cliffs despite the fog, and enjoyed a lively and wide-ranging discussion with the Portland Audubon researchers and volunteer nest monitors.”
New this year, the Friends presented two film screenings. On World Oceans Day in June, Friends presented the film “Albatross” in partnership with Lower Nehalem Watershed Council at the North County Recreation District in Nehalem. In November, “Ocean Shorts,” a program of short films curated by the Wandering Reel Traveling Film Festival, was shown at the Hoffman Center for the Arts in Manzanita to a capacity crowd. The Friends plan to build on that success in 2020, with plans for a film series highlighting climate change challenges and solutions.

The Friends of Cape Falcon Marine Reserve also increased their outreach to the hospitality industry, outdoor recreation visitors, and local government during 2019. They worked with local hoteliers to integrate information about the marine reserves into marketing and in-room materials, providing photos, videos, activity guides, informational hand-outs, and a coloring book. Working with the North Coast Tourism Management Network, the Friends helped launch a Trailhead & Beach Ambassador volunteer program with Oregon State Parks and Oregon Coast Visitors Association, which includes an ambassador station near the Cape Falcon trailhead at Oswald West State Park. The Friends also presented information on the marine reserve to the city councils of Manzanita, Cannon Beach, Seaside, and Gearhart.

The Friends look forward to continuing to learn about and enjoy Cape Falcon Marine Reserve through a full slate of events in 2020, starting with a talk on Oregon’s Black Oystercatchers at Seaside Library on February 19th at 6 pm. The Friends will also participate in the effort to share photographs of the next King Tide series, which arrives at the coast February 8-10. Keep your eyes on local calendars for additional upcoming events. 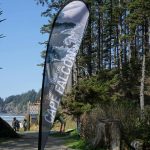