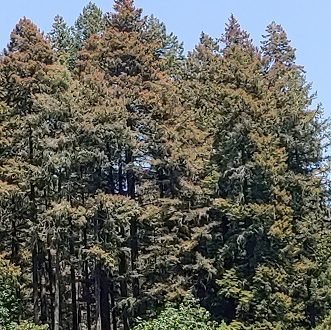 People driving in and out of the valley have been alarmed by the damage to trees caused by the recent heat wave and wondering what it means.  They are not alone.

I have been asking around to try to get a clearer sense of the severity and extent of the effects of the heat wave around western Oregon.  What I have heard from within forestry and Extension circles is that the effects seem wide spread, but variable around the Coast Range and Cascades.  Hotspots I’ve heard about include areas along Hwy 20 near Toledo, and also above Sweet Home.  Hwy 58 around Lowell and Oak Ridge looks rough.  Damage seems less evident in the Valley.

A common symptom seen is foliage scorch/sunscald of new growth, sometimes first or second year needles too, generally on southwest exposures, and the southwest side of the tree.  This can be quite dramatic along roads and other exposed areas, with scorched needles visible from base to crown, particularly in Douglas-fir and grand fir, whose needles turn bright red.   Western redcedar and western hemlock are also affected, although the symptoms may be less dramatic, since the color change is more muted.

What we don’t know is what the long term significance of this heat wave will be.  While we can see the scorching already, we cannot yet see some of the other damage which may have happened that would affect a tree’s long term health, vigor or survival.

Trees and other plants depend a water delivery system that lifts water from the roots to the leaves, cooling the stem, leaves and allowing photosynthesis to happen so plants can grow.  Extreme heat and drought put this system under stress.  When hot or dry enough, bubbles can form in the channels of that system which stops the upward flow of water in those channels.  We cannot see this happen, but it can lead to scorched foliage like we are seeing now.  This damage (called cavitation) can also cause branches or tops to die.  Signs of drought that we have been seeing in Valley in recent years.

This is why so many foresters (including me) are being a little evasive when asked what the impacts of this event will be.  We don’t really know. We don’t like what we see, but in addition we are worried about the underlying damage that we cannot yet see.  That hidden damage will likely show up gradually over the next months or year.

That is part of the problem with unprecedented events.  They have not happened before.  Which leaves everyone guessing, but work is underway to track the effects and future impacts of this event.

Are you seeing foliage scorch or other damage (as described in earlier post) and want to help increase our understanding of the impacts of our recent heat wave?  If so, you can report those effects to help foresters and researchers studying the longer-term impacts of this event.

A group of scientists and forest managers at OSU and the USFS is asking people who observed these effects to report their observations by responding to this survey (link is also below). You will be using a website created by the Oregon Department of Forestry to survey drought impacts on forests.

Since this webpage was originally set up to report drought impacts on trees, you need to clarify that you are reporting about the recent heat wave.

You will be asked to upload a photo of the injury.  Below that you are asked to provide a description or caption for the image.  In that description please note there  that you are reporting ‘impacts of the June 2021 heat wave‘ and also include the phrase ‘foliage scorch‘ so they can retrieve these observations later for mapping and analysis of this extreme event. For example: