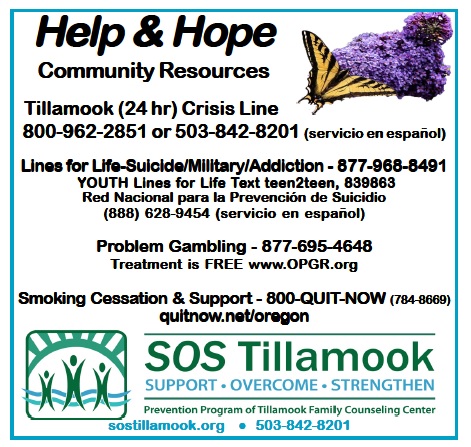 EDITOR’S NOTE: The Tillamook County Pioneer is pleased to announce our newest column “In Good Health” by the Northwest Osteopathic Medical Foundation. We are proud that NWOMF selected the Pioneer as it’s first media partner to increase their outreach and education about osteopathic medicine and general wellness. Weekly columns will focus on particular topics each month. If you have suggestions for health/wellness articles, please contact editor@tillamookcountypioneer.net.
Welcome back! In the last article, we heard from a man who struggled with his parents’ hoarding behaviors when he was a child. He wondered out loud if this had potentially led to his mental health issues, and worried he, too, may turn into his parents. Striking and raw disclosures, but many were able to relate to him and his struggles.
Normally, this week would be a submission from Linda Tate, NWOMF Communications Director, called “A Cup of Coffee”, where she would sum up the month and give her perspective on the topic. This month, however, she gave the floor to another community member. “I feel his words are more powerful than mine could ever be on this topic.
We are all children. I mean that. Not “we used to be children”…no. We are all children. We carry our child around inside of us for our entire lives. The things that get said to us…the way our mother smiles in approval of us when we are infants…the expectations our family/teachers/coaches/pastors put on us…for better or for worse, we carry those things inside of us for our entire life,” said Tate. This week’s contributor grew up around a lot of expectations. His story is real. This, is just one episode of it, and it is my sincere hope that at some point he will be able to tell the rest. But for now, grab a cup of coffee and let’s meet him right where he’s at.
This week, we welcome Gene Hannan, a tattoo artist working in Milwaukie Oregon. He has a different concern regarding children and their mental health. His concern arises from a personal experience he had with a friend who lost his battle with depression which began in childhood. Let’s grab a cup of coffee and read what Gene has to say:

Dis-ease.
A word, for our needs here, that is easier to understand when separated into two parts. It describes a disorder of ease, or anything that interrupts our functioning. These symptoms may, or may not, be physical.

As a young child, like many of us, I had an unending sense of wonder about the world. And, I often had an equal amount of fears and anxieties. When we are growing up, some of our consternation takes root in things such as, but not limited to, how well we achieve in school, play on the ball field, and whether we have what it takes to be successful in life. These small, seemingly insignificant (to adults) hurdles that we need to recover from, can shape our problem solving skills for years to come. And, how we are guided through this whirling eddy of angst, can create an attitude of accomplishment, or a crushing weight under which we cower.
This may be uncomfortable for some of you to continue reading, as I continue here. My aim is not to put anyone into a position of panic, or trigger past emotions, My goal is to start a conversation about the fragility of mental health, and our ability to climb out of despair, and have the courage to address what can be a fatal flaw in our design as a species.
Humans have an amazing ability to be self aware. This gives us the drive to communicate, through language, symbols, art, and music. We have developed eons worth of literature, as well as medical science. Together, we have opened up secret worlds of cuisine, sport, and dance. Our abilities transcend even our simple language barriers; to bring awe to young children, as well as to us awesome people who have been here awhile and have a lot to share.
Which brings me here. Communication, or lack thereof. The same thing that causes toddlers to act temperamental, as well as our loved ones who start to suffer from the manifestations of dementia. Our inability to properly voice our wants and needs, can lead us on a destructive path, and in some situations, can be fatal.

In June of 1993, I received a phone call from a good friend of mine. She informed me that her boyfriend, my buddy “Gibby,” had taken his own life, with a gunshot. My heart sank, I panicked, and thought I would throw up. I was given the task of getting our friends together, and letting the ones who hadn’t heard, absorb this awful news.
Gibby and I spent numerous nights as teens drinking beer, talking about toys that we wanted, and our girlfriends. We also chatted about anger, and our bitterness with a cruel, capricious world. He never answered a single question about his parents, but seemed to love my family. It was only after his passing that I found out why.
This young man was raised in a specific religious faith. By the time I met him, he was solidly in the “punk rock” camp and, like his family, his religious upbringing never came into our talks. The brand of faith he was raised in has a council of elders, intended to keep kids in line by voting by bureaucracy, whether an alleged “sinner” had upset God or not. Many times, these “elders” are your peers, who are also going through their own teenage jealousies and issues.
Well, it was decided, due to some simple kid stuff, that his actions were deemed sinful in nature, and he was disfellowshipped at 15, or so. To anyone not familiar with this practice, it is when someone is to be shunned, but still is expected to go to the Hall for services, and continue to be around everyone as an invisible pariah. Rightfully so, this didn’t sit well with the young man, and his family disowned him when he made a fuss about it. According to people of his congregation that I spoke to, he was a good kid, by their standards, and was harshly judged.
Gibby and I hung out quite a bit, up until he started to delve into a world of drugs to ease his pain. He showed signs of unwinding, but no one could reach him. He was like a lovely three year old, unable to put thoughts of his needs into action, and ending his life in a preventable death. And, while I would never lay the blame of his final act on his family, the events leading up to it definitely didn’t aid in the salvation of his mental health. He was sad, felt abandoned, and everything he was taught to love and cherish, disappeared. And, then, in turn, he gave up on this world.
I hope, for every parent, child, and friend who reads this, that they create an environment of nurturing, and where people can be themselves. When discussing mental health, we need to be wary of our judgements. Instead of asking, “why do you keep repeating your actions of insanity?” try to question what causes their pain. Unfortunately, we are not able to save everyone, but hopefully none of you have to go through what anyone connected to my dude, Gibby, had to endure. Life may be painful, and it definitely can be depressing, but, we can recover and endure. Tell someone that you love them.
RIP Gibby, Dallas, Tyler, Dante, and Neil
I love you all, and wish we could have gotten you the help you so desperately needed.

For more information about NWOMF see their website at www.nwosteo.org, or David Tate, Executive Director at tate@nwosteo.org or Linda Tate, Communications Director at linda@nwosteo.org, or call 503.263.7878
The Northwest Osteopathic Medical Foundation is a public charity committed to Advancing Wellness through the Osteopathic Approach. As a charity, we do not represent any medical school, medical association, medical practice, or individual physician.
This blog should not be considered to be medical advice. Your personal health is best discussed one-on-one with your personal physician. Rather, this blog is intended to highlight the distinctive philosophy and practice of osteopathic medicine as expressed by the author and does not necessarily represent the opinion of the Northwest Osteopathic Medical Foundation, or other Osteopathic physicians. The information and opinions are solely those of the author.