EDITOR’S NOTE: This is the last chapter of the Diary of a Depot. If you didn’t see all the chapters, links are below. The story of a family as told by their home – the Rockaway Beach Train Depot. This nearly 110-year-old building remains at North 3rd Street.

By Virginia Carrell Prowell
It was only a short time, probably no more than a week when Mr. and Mrs. Martes started moving their belongings in. They had a lot less to move in than was moved out but they are not going to be permanent residents. It was clear from the beginning that I was only to be used for vacation periods.

The first day they moved in, I was still in shock over my long time residents, the Carrell family, moving out and perhaps it wasn’t a friendly feeling I had towards them but I didn’t feel that much good-will coming from them either. Of course, the fact that the water heater decided at that time to go out and the discovery that some of the old plug-ins in the upstairs didn’t work, didn’t make Mr. Martes the most congenial man to be around.
The commotion caused by the former family of three teen-agers couldn’t hold a candle to the ruckus he raised at these discoveries. He was furious with the Carrell family and called her to complain and insisted the Carrell’s should purchase a new water heater and reimburse him some for the failed electrical plugs. I couldn’t hear the other end of the conversation but from his reactions, I am sure she did not agree with his request.
I know for a certainty that the water heater was working when they left because Virginia thoroughly cleaned the house before she left and the hot water heater was working then. As for the electrical plug-ins, they hadn’t worked for many years, even before the Carrell family moved in, but they were used to it. I’m sure they didn’t think about mentioning it.
In a day or two, a new water heater was delivered and things calmed down but Mr. Martes was not a happy man. His wife Sandy was busy trying to get things organized in her new beach house.
It wasn’t long before this couple started making plans for some remodeling. I just don’t understand what is the matter with people. Why can’t they just leave well enough alone? The previous family did enough remodeling to last any building a lifetime. Now this family wants to put me back into a duplex. Here come the crow bars and saws and hammers again. They are going to put in another door. I think I have had a door put on every stud on my south side. It is fun to watch a carpenter try to make things even around me because my original 2 x 4’s are actually two by four … not planed to a lesser measurement. 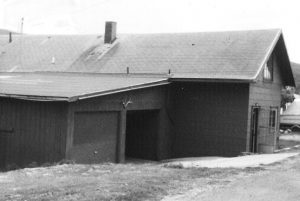 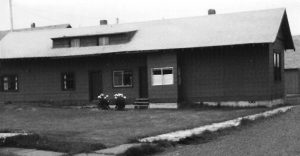 One thing about being a duplex, there should be more people around and I won’t stand empty all the time. People coming and going make me feel needed. I can give warmth and protection to them and maybe even create a few good memories of days spent at the beach.

This Martes fellow only kept me for four years and then he sold me to another non-resident, a Dr. Kraus. I stayed kind of in limbo as I had been remodeled by the Martes family and then a builder by the name of Wayne Murray converged upon me and I began to wonder just what he had in mind.
Dr. Kraus hired him and he really looked me over good. I could tell he knew good construction when he saw it. One of the first things he did was tear off that damnable dormer the Carrell family had put on and he restored my roof to its original design. That alone made me feel quite normal. He told Dr. Kraus that the over-all structure was in good shape and the roof only needed to be reshaked. 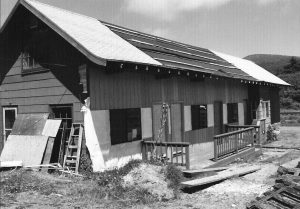 When he started remodeling me, there was hardly a board or fixture that didn’t get ripped out on my insides. Boy, I bet if Virginia could see that kitchen that she so carefully designed ripped apart, she would just about die. He was very careful with the cupboards, however. I think he has plans for them but I don’t think they will grace my walls again.
He ripped out all the paneling Willard so painstakingly put up and the carpet came up, too. The flooring of my upstairs was ripped out and I wondered what in the world he had in mind when he started doing that but he seemed to have a scheme in mind. I was beginning to think they were going to dismantle me completely, but from the conversations I had overheard, I knew they had other plans for me.
It wasn’t only my insides they ripped apart; they also tore all those asbestos shakes the Carrell family had paid a small fortune to put on. It makes me want to shake like an earthquake when I think of all the improvements that have been put on me and now they are being destroyed. I sure do hope this plan he has works out for the best. 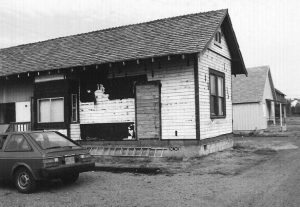 He worked on me for almost a year … he even took out those doors everyone else had put in on my south side and replaced them with four new doors … one more than I had ever had before. He had to take a lot of the constructions off and put up new boards for this phase. I do hope he’s using as good lumber as I have in the rest of my structure but I’m sure he is.
Instead of an upstairs closed in, I now have a loft and am finished off in a grand fashion. There are four apartments instead of three and he enclosed the garages and built on where my carport had been.
Mr. Murray told someone, “This is a great old building that has lasted all these years. I’m sure glad I can re-model it. I think it will last for another hundred years. 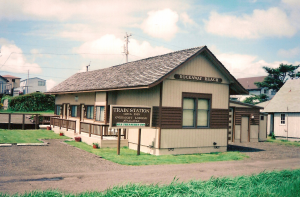 The finishing touch that makes me the most proud is the sign that is posted out toward Highway 101 … it reads “THE ROCKAWAY BEACH TRAIN DEPOT MOTEL” … at last everyone who goes by in cars and especially the passenger train that goes by occasionally in the summer will know my origin and what my structure has contributed to this town.
If you happen by on 101 just north of 3rd Street, wave to me. 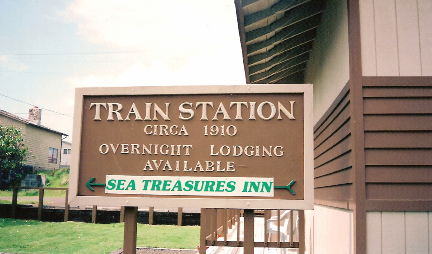 UPDATE
Since 1994, the first printing of the book about my existence, there has been many changes made, both in ownership and in the usage of my interior. I was a Motel when owned by people named Wright.
In 2000, Theodora and Bradley Weaver purchased me and I became a single-family residence. (Note: Brad and Teddy Weaver own the Fog Horn, formerly known as Lake Lyle restaurant).
The Weavers sold it in 2006 to a Barbara Raryukin and now I am a duplex and the “Train Station” sign has been painted over. This saddens me, as I am afraid that the history of the vital part I played in the development of this town will be forgotten.
It is my hope that after you read my story, you will inform others of my continued existence and perhaps keep the progression of condominiums from invading this part of the history of Rockaway Beach.