EDITOR’S NOTE: I hope you are enjoying Chuck’s stories as much as I am … if you are new to the series, this is #8, and links to the previous R&R are below. A reminder of the “time period” that Chuck is talking about here – the late 1930’s. Here we go, back to Bakersfield and schoolboy memories.
By Charles McLaughlin
Continuing our chat about schools in Bakersfield now, 4th grade was the time of life when girls became visible in a new way. Heretofore they where seen, of course, but did not register as something exciting or interesting. They were just girls and we were just boys. Well, a short blonde girl named Nancy (Top row 1st on left) who sat across the aisle from me in class suddenly morphed from “just a girl” to an attractive girl and interesting personality. And as though some mystic spell were cast over every boy in class, out of the blue, my neighborhood friend Jim Sears took me aside and revealed to me his new interest in Nancy! In addition, it was nearing Valentine’s Day and what was normally a silly little game the teacher dreamed up to keep the students focused also morphed into a frenzy of giggling girls furtively peeking at who knows who and Jim and I eyeballing Nancy. I can’t remember who impressed her the most but we, Jim and I, decided it was normal and ok for both of us to love her. So we each wrote her a secret valentine, crammed them into a small jar and buried it in my back yard in a solemn symbolic gesture of our eternal love. Well, it came to nothing, as she never displayed any interest in us at all. But that didn’t matter, we knew she knew and we, like knights riding off to perform a sacred deed in her name, went out at recess and played soccer.

You might wonder what we kids did for fun in the hottest place this side of Hades? Well, we thought-up lots of things to do that I’m pretty sure no one does nowadays, such as playing “tires” and “bottle caps.” What the Dickins is that? you might ask. Hold on, I’m getting there! “Tires” was sort of recycling. We’d each scrounge a worn-out tire from somewhere and in the morning, before the sun had reached the boiling point, gather at the corner of 23rd and “E” Street, line up with tires at-the-ready and at the shout, “Go,” start running en masse down the street, all the while rolling the tires while slapping the tread face with the flat of the hand to increase their momentum. The object was to get to 22nd street first! I know! I know! Who in blazes ever thought that up? I don’t know but it didn’t cost anything and kept us rascals busy!

Now bottle caps was a little more imaginative and diversified. As you’ll see when I explain it to you. In those days, folks, soft drinks, like Coke, came exclusively in bottles. No cans. And you couldn’t just twist off the cap to get to the drink either! No, sir. Not if you wanted to play caps! You had to carefully pry it off with a bottle opener without bending the cap and once you got it off and slurped down the drink, you recycled the cap. And here is how you did that: First, you’d carefully remove the cork wafer stuffed under the cap and stash it somewhere for future use. Then you’d fill the cap with wax and it was ready to play. To play you had to have, say, around ten caps. Then you and some guy would go out to the sidewalk in front of your house and, using the relief lines of the sidewalk instead of a circle, play “caps” like marbles. You put the ante in the center of the square and then, in turn, each player would use a cap as his shooter and by bending his middle finger and grasping it by his thumb, flick the shooter toward the caps in the square. Simple. Why didn’t we just use marbles? I don’t know!

The diverse aspect of “caps” was to hold a cap against your T-shirt and push the wafer inside the T-shirt and back into the cap, thereby sticking the cap to the T-shirt. Some kids would only do that with rarer soft drink caps, like Delaware Punch. Other kids would amass lots of them on a single T-shirt to show off his collection. Exciting? No, but it was imaginative.

To escape the heat, residents of “B” town grew lots of trees and the town had lots of parks with swimming pools. Being a farming community meant irrigation via a network of canals as well and that was a boon for guys who were into skinny dipping! The 24th Street canal first weir was just a few blocks from our house but it was co-ed so we had to use the 2nd or 3rd weir further West to do our number! However, landowners patrolled these places different times during the day so we used the air space behind spill water flowing over the weir as a place to hide. No problem!

The parks provided shade and lots of room to play “Capture the Flag,” “Touch Football,” etc.. They had restrooms, drinking fountains and, most times, a swimming pool. You could even picnic there! Heh, who could ask for anything more?

If it were at night and before bedtime, we’d play “Kick the Can.” And if it were on weekends, there were also the movies at the classic Fox Theatre 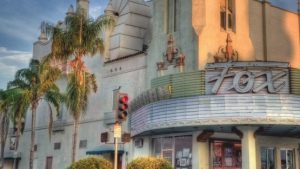 (with beautiful Skouras interior) just a few blocks from home. Back in those days when a matinee double-header was being shown, during the intermission between films an organist would start playing down next to the stage and the screen would show a bouncing ball that would set the timing and words for the audience to sing along. The intermission also provided enough time to use the bathroom and to load up with some candy and a soft drink. The candy bars that were popular in those days were Big Hunk, Abba Zabba, Babe Ruth and Almond Joy. Planters Peanuts were popular, too. Now, Big Hunks in those days really were big, about a foot long and well worth a nickel! It only cost a nickel or dime to get into the matinee. Another bonus was if the audience thinned out after the intermission, a kid could sneak up and grab one of the lodges to sit in. Now that was top-of-the-line!

One last note … Rascals such as those who formed our motley crew dreamed up a way to get in a matinee free! We would gang up outside the doors leading into the theatre and when they opened to let out those among the audience that didn’t want to watch the second feature started coming out the boors, we would spread out and walk into the lobby backwards, there being too many leaving for the ushers to notice we were coming in, not out. Worked most of the time but sometimes not so well. But we had a plan “B” We’d pay for one guy to go in who would take a seat close to the exit curtain and then when the ushers had finished leading the people to their seats (Yeah, they did that in those days!), the chosen one would slip down to the floor and crawl behind the curtain and open the exit door, letting the rest of us in and, one-by-one, slip into a vacant seat nearby. That worked 99% of the time. Sneaky, but short of a cardinal sin!

During this time my friend and mentor, Rob Suender, whom I mentioned a few hundred words ago, were inseparable. Rob lived near the corner of 21st and E Street, one block from my house. We attended school together from grade school at Franklin School, through Junior High at Emerson School and Kern County Union High School (KCUHS). He taught me the beauty to be found in the wilderness he loved and frequented surrounding Bakersfield. His father was a naturalist and Ranger which helped guide Rob toward botany and zoology. Rob introduced me to frogs, toads, skinks, turtles, dragonflies, water striders, crawdads, cottontail rabbits, Jackrabbits, Red-tail Hawks, Meadowlarks, Garter snakes, Rattlers, King snakes, Juniper, Sage, Oak, and innumerable other life forms that turned on this nature-hungry lad down from “Oz.” We would spend most of our weekends wandering the expansive fields and creeks running through them, often engaging in frog gigging and crawdad hunting. In short, we were a pair similar to Tom Sawyer and Huck Finn!