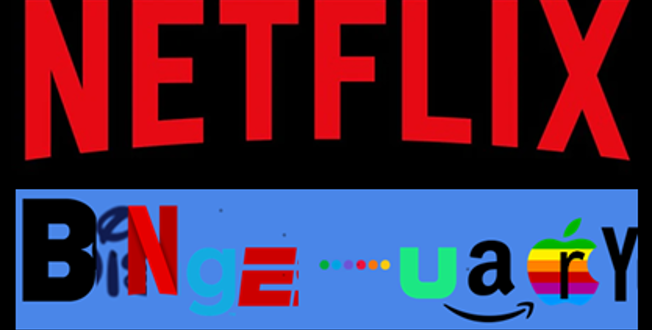 By Andrew Jenck
Now we come to the final entry of Binge-uary for the one that started it all: Netflix. The platform has been a juggernaut since it transitioned from mail-order Blockbuster to cable-free TV in 2007 (I erroneously said it was 2010 in the intro), but is now facing major competition from the services I’ve previously described. Granted, it’s not quite new since it has been competing against Prime, CBS All Access, and HBO now for years, but with some of the biggest studios pulling their offerings that have made the bulk of Netflix’s library, it’s do or die for the company. Or is it? Click-bait articles are quick to point to the loss from the company, but others have stated that Netflix is too much of an established institution and for good reason. Netflix may be losing content, but it still hosts many advantages over the competition.

One major aspect to the new streaming landscape is the return of episodes released on a weekly basis. HBO and CBS have done so, but it may be more popular with Disney+, in order to prevent users from ending their subscriptions in a weekend, even though you could just wait a few months to watch it all. Netflix, meanwhile, not only drops the entire season of an original programming on one day but also spaced out. When Netflix first started making its own content in 2013, their major competitor was still traditional TV, so they could and still can afford to release the whole series. I’m not entirely against weekly viewing; personally I can appreciate the show more, but it can be a turn off for others.
A major concern people have is the Netflix’s debt of $12.43 billion as of September 2019. The company spares no expense in getting top-tier actors, filmmakers, and even occasionally high productions for their originals. They’re not quite the same budgets as The Mandalorian or Game of Thrones, but it’s clear Netflix sets its most popular programming as “event-shows” in a similar manner as “event-movies” i.e. Stranger Things 3, not Stranger Things: Season 3. However, such spending is necessary to generate this high profile content — it’s a “capital-intensive business.” Netflix’s strategy is creating a “capital structure that results in the lowest weighted-average cost of capital.” Fixed costs are also detractors for the newcomers, as it is for most industries. They need to build up a library of their own, while also having to usher in more people to their website whereas the 2007 Netflix could just rely on others’ content for six years before creating its own programming.
Granted, the competitors have or will have their own library of shows, but who’s to say the majority of people didn’t already get their fill of those shows. Taking off-popular programming is a risky move, as people who may have enjoyed the shows may not be happy with it off of their preferred platform. They have original programming of their own, but it’s not that original. The bulk of the content produced by the newcomers are reboots, revivals, sequels, and re-visitations of pre-existing properties. Netflix also reboots franchises, but it is a more healthy balance between that and new ideas. That’s not to say the newcomers can’t attract talent to make something original, but they’re in less of a position to do so. A new idea is less of a risk in TV than in film nowadays, but you can never quite tell if people will pay $7 or more per month for an original idea in the same way you can for a pre-established IP. I have no doubt the newcomers will have some originals in the next few years, but it will be a steep hill to climb.
I’ve done my best to research everything and get the greatest scope of the streaming industry, but I can’t know exactly what it will look like by the 2030s. From my research, people calling doom and gloom for Netflix does feel a bit overstated. They still have the most variety of all the shows, the best interface from what I’ve used, and it will still have third party support. Other smaller studios such as MGM, Lionsgate, and others will still likely provide content on Netflix. Others don’t want to abandon the ship entirely, as Nickelodeon has struck a deal with the company and although Sony has crackle, it is giving the exclusive rights to Seinfeld, effective 2021. Could these aforementioned deals be somewhat desperation-driven? Sure, but I don’t see anything quite complimenting Netflix, when the name of the game for some is supplementing it. Streaming is a way for the major studios to remain relevant, as people cut the cord and buy fewer movie tickets.
Competition-wise, Prime will still probably be Netflix’s biggest rival. Disney is gaining momentum. HBO has an established consumer base, but will need to convert most of that base away from it being a cable add-on. Peacock and CBS are wild cards and could go either way. However, Netflix founder Reed Hashings, calls their future growth “coming out of linear TV” whereas Netflix is the only service that truly grows from binge culture. Maybe that’s why he considers sleep their biggest competitor.
Next time: something about movies, I promise. Thank you all for tuning into this mini-series and here’s to a more consistent release schedule this year.
For more about Bingeuary, here are links to Andrew’s other editorials:
https://www.tillamookcountypioneer.net/drews-reviews-editorial-streaming-in-the-2020s/
https://www.tillamookcountypioneer.net/drews-reviews-editorial-hbo-maximized-dcu-minimized-streaming-services-series-continued/
https://www.tillamookcountypioneer.net/drews-reviews-editorial-cbs-all-lacking-streaming-services-series-continues/
https://www.tillamookcountypioneer.net/drews-reviews-editorial-not-a-flightless-bird-streaming-services-series-continued/
https://www.tillamookcountypioneer.net/drews-reviews-editorial-taking-a-bite-streaming-services-series-continued/
https://www.tillamookcountypioneer.net/drews-reviews-editorials-when-you-watch-upon-a-star-last-bingeuary-streaming-services-series/