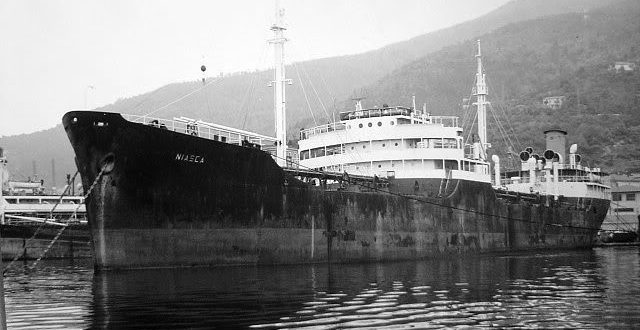 By Charles McLaughlin
In 1944 at the age of 16, I joined the Merchant Marines, received training at Catalina Island off the shores of Southern California and then shipped out for the South Pacific aboard the T2SE-A1 tanker Ft. Donalson as an Ordinary Seaman.

Harold was at that time flying in B-29s as a radar operator and stationed on Saipan in the Northern Mariana Islands of the South Pacific. His squadron was making bombing runs over Japan and he flew an astounding 35 missions before being discharged and returning home! Coincidentally, the Ft. Donalson sailed first to Enewetak in the Marshall Islands and then on to Ulithi in the Caroline Islands, not very far from Saipan. Our ship also dropped anchor here and there and performed some transfer of oil to naval ships on open sea in between.

On the warm and tranquil evening of November 20, 1944, while anchored in the Southern Anchorage at Ulithi atoll, our ship and others in near vicinity were attacked by Japanese Kaiten suicide submarines! That black as pitch night was suddenly lit as though it were midday and then turned black again. Then again it turned bright, followed by huge explosions and flames, the concussions of which shook our ship and caused it to pitch and roll like a cork on water. Shocked and somewhat disoriented, we were able to make our way to our battle stations while the explosions and resultant flames continued. Our ship was not damaged but the tanker Mississinewa anchored forward of us was engulfed in flames and sunk with the loss of all but 63 of its 352 crew members. When things calmed down we were informed some Kaiten subs had entered the anchorage and destroyed a small naval aircraft carrier as well. This was the only time the Ft. Donalson was under direct attack conditions while on duty during the war. Several weeks later, we returned home for refueling. I disembarked in San Francisco and returned home for Christmas.

One brief note regarding the attack in Ulithi. For several decades after that unforgettable incident, I tried to locate naval history of the attack upon our Naval forces and the merchant ship Mississinewa. I could never find any formal confirmation of what I had experienced but about 10 years ago a good friend of mine, Bill Mullen, of Nehalem, out-of-the-blue sent me a link to a video he thought would interest me. Mark you, he had no knowledge of my experience in Ulithi. When I clicked on the link, up popped the lead line “Ulithi, November 20th, 1944” and proceeded to show actual footage of the sunken tanker Mississinewa and in the background you could see a huge column of smoke coming from another victim of that attack. It didn’t show the carrier but it convinced me that the whole story was right there for all to see who had been there.

Another aspect of this story was that about a year ago I purchased an autobiography by a Japanese Kaiten operator and discovered he verified the attack on Ulithi that night but thought it was a failure! He was under that impression because not one of the suicide team survived and the Navy never confirmed the attack! Another book written by one of the survivors of the Mississinewa sinking wrote a book entitled “Kaiten.” It was published by Penguin.

Kaitens were piloted by a lone Japanese volunteer and his mission was to die for his country: hit or miss! Once he was sent out, he never returned. A miss meant blowing himself up!

During the next nine months I was at home but not working, just lolligagging around, meeting up with my friends, partying and deciding what to do next with my life. Everything drastically changed when on August 16th 1945 at exactly noon my mother died of a heart attack! She was but 39 years old. In that my brother and sister had already left home and I had just turned 18 and capable of fending for myself, it was decided Grandpa and Grandma could return to the bay area that they loved and I would join the U.S. Navy. And that is what happened.

While in the Navy, I trained as an Aviation Electronic Technician Mate (AETM) in Jacksonville, Florida and Corpus Christi, Texas. Following training I was sent to join a weather squadron stationed in Miramar, California, a few miles north of San Diego. My duties there were to maintain and repair electronic equipment and to operate the radar and radio equipment while airborne in a PB4Y2 aircraft. Our mission was to fly reconnissance flights over the southern west coast of California. I remained there until the latter part of 1946.

While in Jacksonville, Florida, the springboard diving training I received from a former diving champion (mentioned earlier) came into play. The Navy was holding a Naval District competition, part of which was springboard diving. I knew nothing of it until an unknown seaman approached me in my barracks and said he’d been informed I was a diver. Surprised, I said that was true and asked him why he was asking. He then told me the person who was supposed to perform as our representative had taken ill and whether I would fill in for him. I told him I hadn’t competed in years but I’d give it a try if he couldn’t find someone else. As it were, I ended up competing and by some unbelievable good fortune, won the event! The intent of telling this story wasn’t to be braggadocio but to point out how small decisions we make can totally change our lives. A short time later the coach of the diving team approached me and offered me a position on the Naval diving team, which would mean extensive advanced training on state-of-the-art equipment and traveling and performing throughout the country in order to promote recruitment. I thought about the offer but decided to turn it down, as I didn’t wish to make a career in the military. You see, in order to join the diving team I had to commit to a 4-year reenlistment. At that moment in my life I was not thinking military but rather home!

When getting back home I, like thousands of returning vets, joined the 52-20 club. This was a coined term describing a government program that paid homecoming vets $20 a week for 52 weeks to help them re-adjust to civilian life after discharge. I used it to help me learn to fly! I had flown in planes during the war but didn’t fly them.

I trained out of Minter Field outside of Bakersfield which housed small fabric or metal planes like Beechcraft Bonanzas or Navions. I trained in a Taylorcraft, a high-wing, fabric two-seater, received my pilots license and flew my first solo cross-country, which included one leg to Panco Barnes airstrip in the Mojave desert, the second leg to Cambria Pines on the coast and the last leg back home.

Pancho Barnes was a female pilot of the barn-storming type and daughter of a rich guy who allowed her passion for flying. She is a legend and became a fixture in the Antelope Valley of the Mojave Desert by constructing a landing strip, hotel and bar/restaurant to accommodate flyers of all sorts and some soon-to-be-legends themselves. She also established the “Happy Bottom Riding Club” of which I became a member back-in-the-day when flying in on the eastern leg of my solo cross country flight. Let me set the stage for you. This strip was nothing fancy, dirt, not really wide and not very long as I remember it. And the winds there were bitchin’ and could change direction 90 degrees in the middle of your stall coming in for a landing! There is not much air lift there either, which some times meant several takes at getting the light-powered fabric planes over the mountains to get the heck out of there. Well, after you landed you went into a structure reminiscent of an old western bar and in there there was this ledger-like book you signed your name in and that was all it took to make you a member of the Happy Bottom Riding Club!

The thing about this that renders my becoming a member memorable is that years later I was watching the film version of Tom Wolfe’s 1979 book “The Right Stuff” and, by golly, the future astronauts’ first get-together was right there at Pancho Barnes’ place and they all joined the Happy Bottom Riding Club! Now ain’t that something …